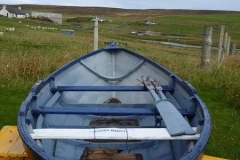 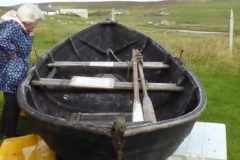 As you will have read from the description on our tours, we like to share a good bit of history along the way as well as sharing our great knowledge on all the beautiful wildlife/nature we spot along the way, all our previous passengers love this good mix and is one of the factors that makes our popular 4-Star tours so unique.  We have many many stories to share about the history of Noss when moored up at our regular refreshments stop, which also has loads of wildlife spotting opportunities. I am sharing information from a friend Linda Sutherland who grew up in Bressay, which has given us even more information to share. Her story tells us all about the history of the boats that were used to transport between Noss & Bressay in the 50’s & 60’s, very interesting.

Linda’s Grandfather got tenancy of Noss in 1939, after he died his sons carried on farming, based on a croft in Gunnista plus Noss and one or two other small bits of land. The youngest son was Linda’s father. Linda and her Sister spent every summer in Noss until 1969, when the brothers gave up the tenancy. She has many fond memories of using the boats, fishing for pilticks on summer evenings, swimming kye and pony into and out of the isle, rescuing sheep stranded on a skerry at da Heidless Banks. I could write more but that’s all for now folks!

The three boats were included in the Boat Week display in 2017 at Bressay Heritage centre. These boats were our transport between Noss and Bressay in the 50s and 60s.

The black one is the Bressay Lass, originally built for a Hardie man as replacement for one lost in Bressay Sound in 1910. We used it for flitting lambs out of Noss.

The blue one was our Noss workhorse boat, ferrying us and visitors over Noss Sound. Like the Bressay Lass, it was bought second-hand. Dad told me it had been built by Walter Duncan for a Captain Williamson of Owsensetter, to the spec that it should be light enough for one man to launch and draw ashore. It certainly was light, and easy to handle (even for a ten-year-old me. :-))

The green punt was built for my uncle by George Smith of Gunnista, Bressay. I don’t remember it being used very often – probably the main reason for having it in Noss was as emergency backup, in case the Walter Duncan one was unusable for some reason.